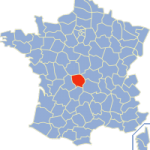 The term ‘Aubusson’ carpets refers to the cities Aubusson and Felletin, both situated in the Creuse valley, which has been renowned for its wool based industry for centuries.
The oldest references to Aubusson (wall hanging) tapestry date back to the 15th century.

Flemish weavers, on the run for religious conflicts in Flanders, are believed to have settled in the area in the beginning of the 16th century.
They imported their weaving skills and were gradually influenced by the French style, thus preserving their famous weaving tradition. 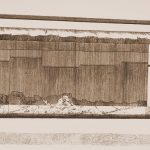 King Henry IV issued an embargo on Flemish wall hanging tapestry in 1600, halting its successful entry into the French market.

In 1665, Colbert grants the Aubusson, workshops patents, giving them the title “Manufacture Royale”.
The city of Felletin was given the same title and privileges in 1689. 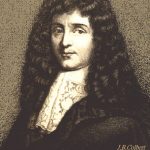 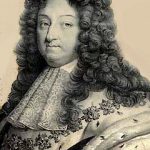 The decorative style of the tapestries evolved with the contemporary fashion and political regimes: Louis XIV, Regency, Louis XV, Louis XVI, Directories, Empire, Restoration, Second Empire and so on into the 21st century.

As aesthetics and comfort gain increasing importance during the course of the 18th century, particularly among royalty, nobility and later on the bourgeoisie, Aubusson tapestries enjoy a similar popularity boost.

Gradually, the term Aubusson became a synonym for the typical 18th century motifs, made in the golden age of Aubusson tapestries.

These designs have also found their way into a different technique, the so-called “Aubusson au Petit Point” or “Needlepoint” technique.
The wool is knitted in a half cross-stitch on a canvas or cotton rastered frame, a technique, which found its origin in the “Tapisseries à l’aiguille”. 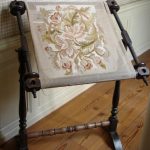 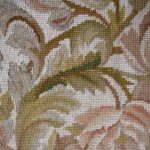 This method was previously used for smaller decorative items made by upper class women. The name “Needlepoint” as such is a common term for knitted tapestries as this technique was quite popular in England at the end of the 18th and the beginning of the 19th century.

As early as at the end of the 19th century, a group of French manufacturers travelled to China with original templates or “cartons” in an attempt to revive the weaving industry in France, which was sinking to its deepest level in its history at the time.

The revival came during the antebellum, albeit for the modern designs, as the production of classical designs had already been moved to China.

offers consists of historically correct reproductions of original Aubusson carpets. They are made in the traditional ‘gobelin’ weaving method. The antique Aubusson rugs are now only in museums or in private collections of several French castles.

The rediscovery of this unique decorative element in interior design can give 21st century living rooms the timeless, stylish and warm atmosphere.

This website uses cookies to improve your experience while you navigate through the website. Out of these, the cookies that are categorized as necessary are stored on your browser as they are essential for the working of basic functionalities of the website. We also use third-party cookies that help us analyze and understand how you use this website. These cookies will be stored in your browser only with your consent. You also have the option to opt-out of these cookies. But opting out of some of these cookies may affect your browsing experience.
Necessary Always Enabled
Necessary cookies are absolutely essential for the website to function properly. This category only includes cookies that ensures basic functionalities and security features of the website. These cookies do not store any personal information.
Non-necessary
Any cookies that may not be particularly necessary for the website to function and is used specifically to collect user personal data via analytics, ads, other embedded contents are termed as non-necessary cookies. It is mandatory to procure user consent prior to running these cookies on your website.
SAVE & ACCEPT